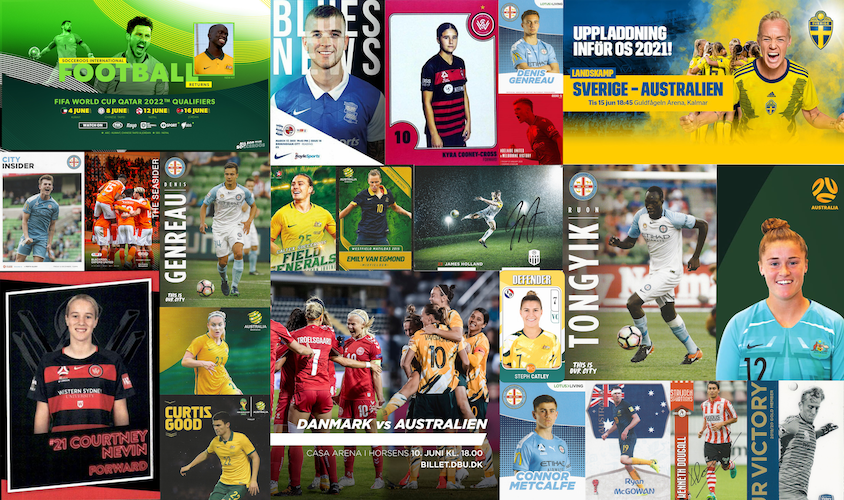 This month the Socceroos played their last four games of their AFC Stage One Group for qualification to the 2022 FIFA World Cup Qatar. Graham Arnold picked a squad of 31 players and took the opportunity to given seven players their debut. They are Fran Karačić (607), Kenny McDougall (608), Riley McGree (609), Denis Genreau (610), Connor Metcalfe (611), Ruon Tongyik (612) and Lawrence Thomas (613). Pictured above are cards and/or programmes of five of the six new Socceroos. The exception is Fran Karačić where I do not have any items nor am I aware of any. Hopefully with his move to Brescia in Serie B he will appear on a Panini sticker or two!

What is probably even more impressive, but probably not as exciting for a player as their debut, is a return to the Socceroos after a long absence. Both James Holland and Curtis Good played their first Socceroo games after seven years. These are the longest absences of any Socceroos since the 1950’s. James played in two of the four matches and Curtis played in the 2nd match. While not as long, it was also great to see the return of the affable and dependable Ryan McGowan after four years. He played in the 1st match against Kuwait and it is rumoured that he lost 4Kg during the 90 minute game! On a personal note I was particularly happy that Lawrence Thomas made his debut. A few years ago I attended a Melbourne Victory open day carrying the excellent Andrew Howe Fairplay book “Encyclopedia of the Socceroos”. At the player meet and greet I asked Melbourne Victory Socceroos to autograph their section. When Lawrence was watching James Troisi sign the book, I said to Lawrence, “Maybe one day you will be a in the book”. With a look and expression of not much confidence he replied, “I hope so!”. Well he has now earned his well deserved and hard fought cap and I hope one day I will meet him again and he can sign an updated edition!

Matildas played international friendlies against Denmark and Sweden before they head off to contest the 2021 Tokyo Olympics. In the second half of the match against Denmark 19 year old best mates and current Blacktown teammates, Kyra Cooney-Cross and Courtney Nevin made their debuts (Thanks to Serge for the scans of the Kyra and Courtney Cards. His Australian soccer collection is found at https://www.thecollectingbug.com/australiansoccercards/explore?8)

By way of contrast, Golden Generation Matilda, Newcastle Jets legend and with an overseas playing career in the U.S.A., Denmark, Germany and England, Emily Van Egmond became only the 8th Matilda to play 100 international matches. Four days later in the Swedish friendly long time next generation keeper Tegan Micah made her debut. She played the full 90 minutes and kept a clean sheet. Teagan’s performance was subsequently rewarded with a ticket to the Tokyo Olympics.

Since the website launch on the 12th June the only addition to the collection is the Swedish Football Association Promotional Banner for the match against Australia. The Banner has been added to the Ellie Carpenter and Steph Catley’s collections in which they played their 42nd and 84th full internationals for Australia.

Topps for the first time issued a 2021 UEFA Women’s Champions League Knockout online set that has six of the eight teams that made the Quarter Finals. The set comprises thirty different players, with five players from each team. Each player has five base and four autograph parallel cards. From an Australian perspective Sam Kerr is one of the five Chelsea players however unfortunately Ellie Carpenter’s Olympic Lyonnais, along with fellow French club Paris St. Germaine are the two clubs Quarter Final clubs not represented in the set.

At the time of writing the set has unfortunately been sold out and cards from the set have not year appeared on ebay or other reseller sites.