Sam Kerr Australia’s greatest ever football star! As an outstanding striker, Matildas captain and focal point of the team  she is a key reason why the Matildas are Australia’s favourite team.  Winner of golden boots awards in Australia, United States and now in England Sam Kerr is a genuine football superstar.

Kerr began her professional career at 15 with Perth Glory and made her full Australian debut in an international friendly against Italy in 2009.  At that time there is no doubt Sam was better known as the little sister of West Coast Eagles star centre player Daniel Kerr but no doubt that view has now reversed! The first Kerr card is part of a 2009 Western Australian Institute of Sport series of collector cards.  On the card Sam Kerr is featured in two images playing in her Matildas kit making this card a genuine Rookie card and is featured right.

In 2011 along with other members of the current Golden Golden generation of Matildas Sam played in her first FIFA Women’s World Cup hosted by Germany,  Fortunately for the collection this was the first world cup where Panini produced their official sticker collection that comprised the squads of all teams competing at World Cup. The Tournament Programme and a ticket from her 3rd world cup match against Norway are also in the collection.

In 2012 Kerr left her home town club and joined Sydney FC for two years.  Internationally Kerr joined the New City Flash in 2013 for the inaugural season of the National Womens Soccer League. Sam also spent 2014 at New York City Flash. It does not appear that Sydney FC or New York City Flash produced any Kerr items from her time at the clubs.  However it was a relief to Australian International footballer card collectors that in 2015 a new Australian company, Tap’n Play began producing international and A-League cards. The design for the “First Edition” was basic however to Tap’n Play’s credit they were the first Australian card to produce both Socceroo and Matildas cards including the Sam Kerr card.

With qualification for the FIFA Womens World Cup Canada 2015 Panini again produced an official sticker collection.  The collection includes both a Kerr sticker and a squad sticker where is she is also pictured. The Australian Guardian newspaper also produced a downloadable retro image card. The collection also includes the offical tournament programme and poster.  Tap’n Play is also issued a “Making History” card that commemorates the first Australian football team to make the quarter finals of any football World Cup. In 2015/16 and 2016/17 Tap’n Play again produced Base, Silver & Gold cards with the 2016/17 set designed by a leading American card creator that resulted in a more interesting and modern design.  It is worth noting that the same image of Sam appears on both the 2015/16 and 2016/17 cards. 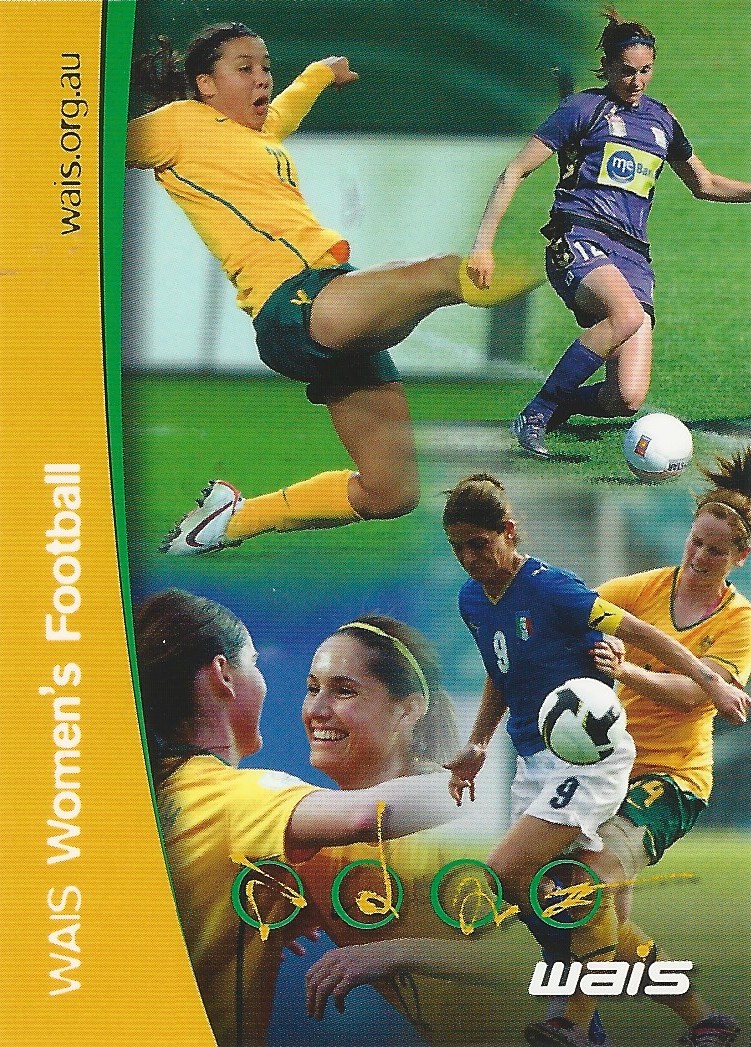 At at club level, in the W-League for the 2014 season Sam Kerr again played for her home state club, Perth Glory. This time however as the first ever W-League marquee player.  In the National Women’s Soccer League  Kerr was transferred from Western New York Flash n 2015 to their neighbouring state rivals the New Jersey’s Sky Blue FC.  The collection includes a 2013 official Sky Blue FC badge sticker that promotes a Youth Helpline phone number. There are also Sam Kerr stickers with an illustrations by amartinezart that are available on RedBubble. Sam played at Sky Blue FC for three seasons and her last season won the League’s Golden Boot and Most Valuable Player awards.

The Tap’n play 2017/18 card release was their last full series and the Sam Kerr cards from this issue are probably the best in the collection.  In 2016/17 Sam Kerr won the Julie Dolan Medal for the best player in the W-League and to their credit Tap’n’Play, unlike previous card producers that only honoured the men’s best player (Johnny Warren Medalist) produced a card of the best women’s best player.  The award, Julie Dolan Medalist is named after the first captain and first cap of the Matildas.  The card is pictured left.  There are Sam Kerr cards in her Matildas kit including base, parallel foil and Magic Moment cards.   Sam is celebrating a goal on the front of the Magic Moment card but unfortunately it is not her backflip.  The other cards are Sam’s first ever official autograph card and an accompanying redemption card.  The autograph card is the featured index card and is pictured top left.

At the end of 2017 in preparation for the the Asia Cup in 2018 and in celebration of the Matildas winning  the inaugural Tournament of  Nations Trophy including defeating U.S.A. they played both Brazil and China twice.  The Matildas won all the matches with Sam scoring seven goals in four games. There are promotional flyers featuring Sam and a ticket from some of these matches.  There is also a 2017 Perth Glory programme that has Kerr on the cover.

The collection also includes the AFC Women’s Asian Cup Jordan 2018 official tournament programme that has a four page “In Focus” article on Sam Kerr as 2017 Asian player of the year .  She scored three goals and played in all five matches in the tournament.  For the second AFC Final in a row the Matildas lost to Japan. They returned to the U.S. in July to defend their Tournament of Nations Title, winning matches against Japan and Brazil while drawing with the U.S.  The Matildas lost their trophy on goal difference.  There are promotional flyers and a ticket from the U.S.A. match in the collection.

In 2018 Sam Kerr was transferred to Chicago Red Stars and was her two years the where she really into prominence both in the U.S.A. and internationally.  Sam did a three-peat winning another two Golden boot awards and still holds the record for the most number of goals in the NWSL.  The collection includes an autographed Red Stars badge sticker, promotional flyer for a Red Star match , schedule booklet and pictured right, a retro designed club card.

From the W-League 2018-19 last season with Perth Glory there is another Glory Days Match Day Programme, downloadable wallpaper card and Sam Kerr Perth Glory Poster from the English Match of the Day magazine.  I am aware of a least one Sam Kerr card that is not the collection.  In a lovely interview with Sam’s grandmother where she opens up the a parcel from Sam of her latest Matilda shirt she also holds up a postcard size Perth Glory Sam Kerr card!

In early 2019 as a warm up for the World Cup in France the FFA recreated the Tournament of Nations concept with a Cup of Nations Tournament featuring Argentina, Australia, Korean Republic (South Korea) and New Zealand.  Sam was appointed Captain for the series and the World Cup in France.  The Matildas won all three matches with Sam playing in all matches and scoring three goals.  There are promotional flyers, a digital match day guide and tickets from the Korean and Argentinian matches. In April the Matilda’s travelled to the United States for their penultimate World Cup warm up with a match against the world’s number one team. There is a promotional flyer and stadium information from the match played in Denver that Australia lost 3 – 5 where Sam scored another goal.

For the 2019 World Cup Panini again produced a Sam Kerr sticker for their official collection.  The FFA produced a sensational fan pack. Sam is featured on the a bunting with Lydia Williams, party invitations with Caitlin Foord, Ellie Carpenter & Steph Catley, a wallpaper/postcard as well a squad card. There is also a downloadable Beyond90 card. The collection also includes the official Tournament Programme including a feature on Sam, unofficial Match programmes and tickets from the three group matches. Despite Sam’s prolific goal scoring and two previous World Cups she broke her World Cup drought in the opening match against Italy and the floodgates opened in the match against Jamaica where she scored four! The Matildas lost their round of 16 match against Norway in a penalty shoot out. 54At the end of 2019 the Matildas played another two match series against Chile.  This time in NSW rather than Victoria.  Sam scored a brace in the first match and there is  a promotional flyer and tickets for both games in the collection.

The big news for Sam Kerr arrived the day after the last Chile match when it was announced she was joining Chelsea in the FA Womens Super League for the second half of the 2019-20 season.  The season was cut short by COVID but Sam and Chelsea still won the Title and League Cup Final, where the official teamsheet is included in the collection. In her second season Kerr won the FAWSL Golden Boot award and Chelsea again won the title but lost the UEFA Champions League Final. The collection includes the official programme.  For the 1st time Topps produced a Champions League on Demand set and the collection has four base rainbow cards and one autograph pictured left.  There is also a Sport Ilustrated Kids card with Kerr in her Chelsea kit.

In early 2020 every Wednesday FFA released a downloadable Matilida and Socceroo Wallpaper.  The Kerr collection includes the wallpaper, a Panini 365 sticker and Top Trumps card. With COVID happening all over the world Australia was fortunate to host Qualification matches for the Tokyo Olympics.  The collection includes promotional flyers one of which features Sam, tickets from games against Chinese Taipei (Taiwan), Korea Republic (South Korea) and the home leg of the final qualifying match against Vietnam.

In preparation for the Tokyo Olympic Games the FFA arranged a series of matches against high quality European opposition.  The Matildas played against Germany, Netherlands, Denmark and Sweden.  There best result was 0-0 against Sweden, with losses in the other three matches.  A week before the start of the Olympics Games they lost an international friendly 1-0 against hosts Japan.  Sam played in all these matches and the collection includes the Arena German National Team Matchday Programme, promotional flyers for the matches against the Netherlands, Denmark and Sweden. For the match against Japan there is downloadable wallpaper.

The Matildas commenced their Olympic Games campaign against cross Tasman rivals and co-hosts of the 2023 World Cup New Zealand.  They dominated with Sam scoring a goal but only own 2-1 after a late goal from the White Ferns. Next up was Sweden where the Matildas were outplayed and lost 4-2.  This time Sam scored a brace and unfortunately missed a penalty.  In the final group game they played a 0-0 draw with the USA where the in end both teams were content with the result despite the US having most of the chances including a penalty ruled out by VAR.   In their 1st knockout match the Matildas played Great Britain and won 4-3 with Sam scoring another brace including an 88th minute equaliser to take the match into extra time.  Their next match was again against Sweden where they lost 1-0 after Sam had a goal controversially disallowed.  In the play-off for the Bronze medal against the USA they lost 4-3 with Sam scoring another goal becoming the all time leading goal scorer for the Matildas.  The collection includes two official programmes shown right and unofficial programmes from all six games. 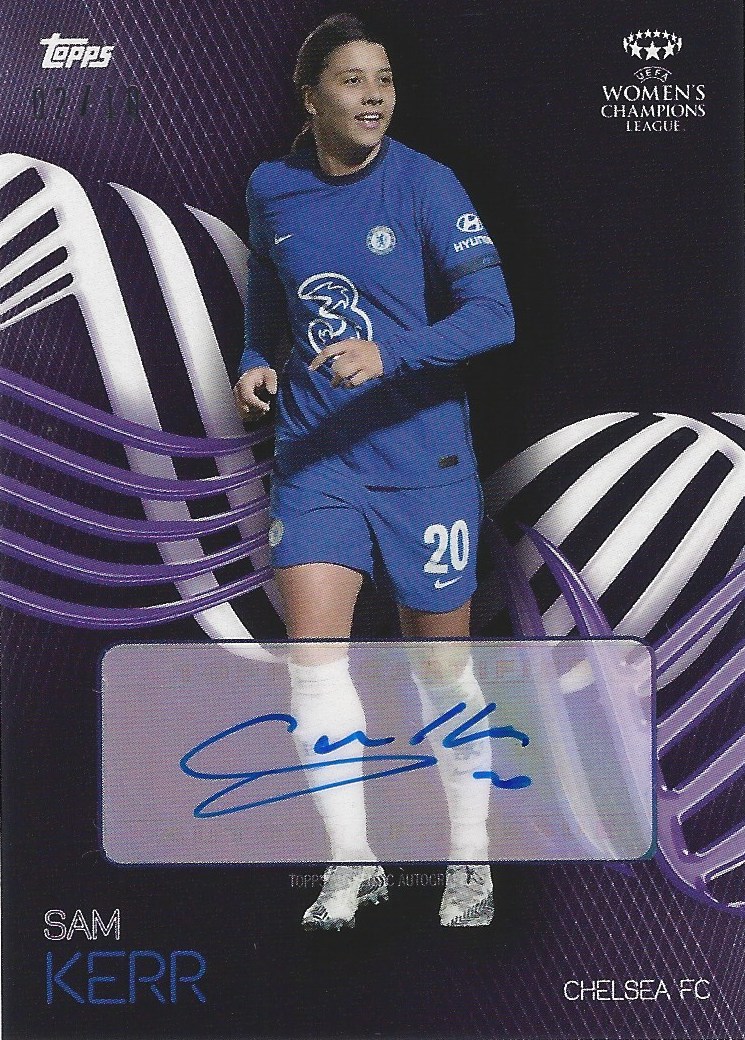 For the Olympics, Woolworths a major sponsor issued a sticker collection featuring current and past Olympians.  The collection included three stickers of Sam including the limited edition Gold sticker featured right.

Following the Olympics in an international friendly against the Irish Republic Sam in September 2021 played her 100th game for the Matildas.  Unfortunately it looked as thought the team didn’t turn up and lost 3 -2.  The collection includes a promotional flyer the match day ticket.  In late October the Matildas finally  returned home after 20 months and played two international friendlies against Brazil where they won the 1st match 3-1 and with Sam scoring in the second they drew 2-2.

The Sam Kerr story is far from over both at a club and national level.  Let’s hope with Australia hosting the 2023 World Cup it will be Sam holding up the trophy! 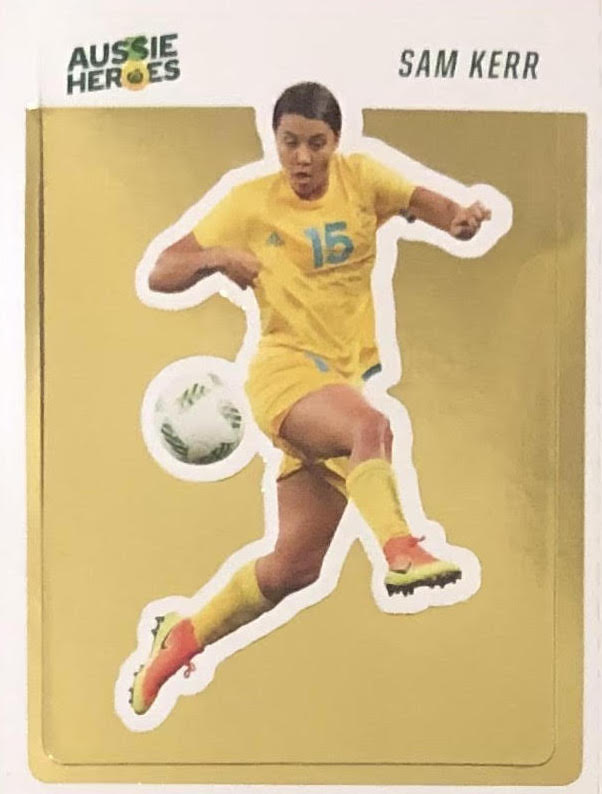