John Aloisi will always be remembered as the man who scored the most famous penalty in Socceroo history.  In November 2005 when he scored the final penalty it took Australia to its second World Cup after 32 years.  The penalty was followed up by the greatest ever goal celebration, with John being chased by his teammates, swinging his shirt over his head, running half way round Stadium Australia into in the arms of family and friends.

From a football career and collection viewpoint John Aloisi is the first and still only Socceroo to play in three major European leagues: Italy’s Serie A, England’s Premier League and Spain’s La Liga.  The collection includes items from these three major leagues, England and Spain’s 2nd divisions, his playing career in Belgium and in and for Australia.

Disappointingly the collection does not contain any Aloisi items from his first two clubs being Adelaide City in the NSL and Standard Leige in the Belgian 1st Division. The first Aloisi item in the collection is a 1995 Panini Sticker that has very nice portrait photo from his second Belgian 1st Division club Antwerp FC. For the 1995-96 season John transferred to newly promoted Serie A team U.S. Cremonese.  On his debut he scored after six minutes making him at the time, the youngest (19) player to score in Serie A. The collection includes two John Aloisi Cremonese stickers and an unusual playing card (featured right) from a series titled “le carte de campioni” (The Champions Cards).

Following Cremonese’s double relegation Aloisi transferred to English 1st Division club Portsmouth where he joined fellow Socceroos, Craig Foster and Robert Enes.  The collection includes a Portsmouth programme where he appears on the cover and an Aston Villa programme from an FA Cup match against Portsmouth that includes an Aloisi article.

In late 1988, Aloisi secured a transfer to Premier League club Coventry City.  The collection has three Topps stickers, an autographed official club card and a programme with him celebrating his first Premier League goal in a match against Spurs.  At the end of 2000-01 season Coventry City was relegated and Aloisi again looked for a new club.

He moved back to the Continent to play in his third major European league with La Liga club Osasuna. The collection includes seven cards and five stickers from his four seasons at the club.  Spanish Panini stickers are probably some of the best designed in the world. The stickers have a landscape orientation with both a portrait head shot and action image.

For the 2005-06 season he transferred to Deportivo Aalves in the Segunda (Second) Division. Unlike most other European countries  where there are rarely cards or stickers from second divisions the collection has an Aloisi card and sticker from that season. With seven goals Aloisi in 05=06 contributed to Deportivo Aalves promotion to La Liga and from his last season in Spain the collection has another two cards. 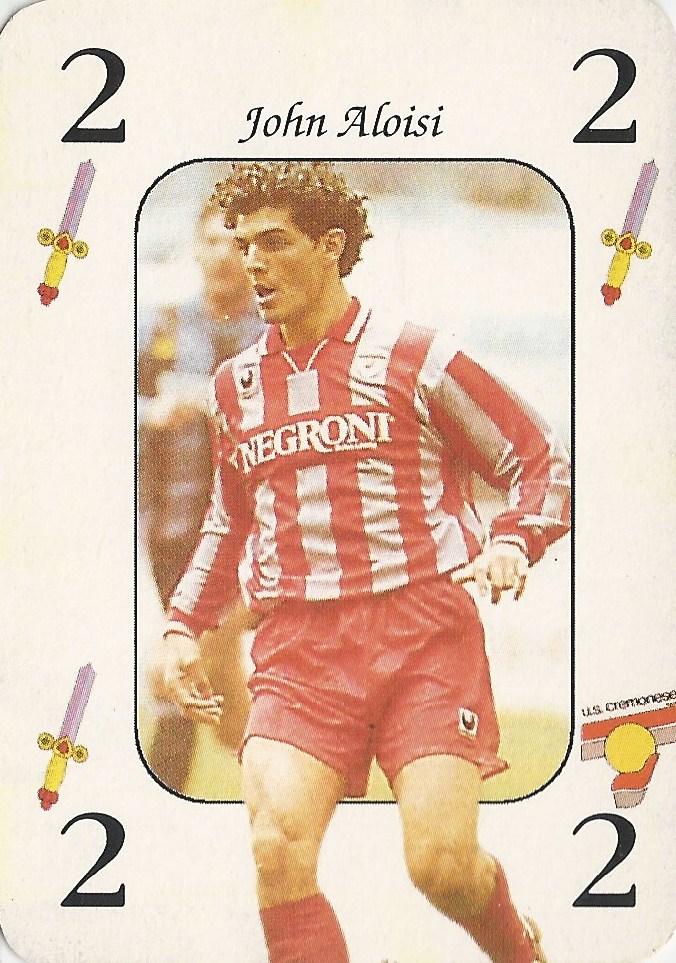 From a Socceroo perspective 2005-06 were the outstanding years of his career and this collection.  He made his debut in March ’97 in an international friendly against Macedonia.  The first of 37 Socceroo programmes and tickets in the collection is from his 6th full international, a 1997 world cup qualifying match against New Zealand.  From his “Golden Socceroo” years, programmes  include the 2005 Confederations Cup tournament where he scored braces in matches against both Argentina and Germany, the aforementioned WCQ at the SCG and all programmes from his four World Cup matches. There is a Socceroo programme (pictured left) from Asian Cup Qualifier where John is on the cover celebrating his world cup goal against Japan.  The 2006 World Cup also saw the first six of 23 John Aloisi Socceroo cards and six of seven Socceroo stickers in the collection. Two of those cards issued by Select, Australia’s premier card company also featured the same goal against Japan. In 2008 John played his 55th and last full international for Australia and the programme from that match is part of the collection.

For the 2007-08 season John Aloisi returned to Australia and was the marquee player at Central Coast Mariners.  The collection has the Grand Final programme that has John Aloisi on the cover.  The following year he transferred to Sydney FC where he spent two seasons.  The collection includes two standard cards issued by Select and a Superstar card.

In his final season John Aloisi became a foundation player at the newly formed Melbourne Heart club (later to become Melbourne City).  With the exception of 2007 Futera World Football 1/1 autographed card, the rarest card in the collection is the Select – John Aloisi Melbourne Heart card. The card is numbered 1 and has been personally signed by John.  In addition these cards were issued in small numbers and only available through card dealers.  On a personal note I attended (only with only a couple of thousand supporters) John Aloisi and fellow Socceroo Josip Skoko’s last professional game.  John scored a goal in this game and repeated his famous 2005 goal celebration, taking off is shirt, swinging it over his head but this time receiving a yellow card! Unfortunately for the collection I did not keep the ticket!

The final three items in the collection were issued after his retirement.  They all feature the same image from his penalty goal celebration in 2005.