Steph Catley began her professional career with W-League side Melbourne Victory in 2009 and made her Matildas debut in an international friendly against New Zealand in June 2012.  Shortly after her debut she attended a Matildas training camp in Canberra.  To promote the Matildas training camp 100 cards were produced for local fans.  The first Catley item in the collection is an autographed Matildas card from this set albeit with Steph in her Melbourne Victory kit! The other Melbourne Victory item in the collection is the 2014 W-League Grand Final Programme where Victory defeated Brisbane Roar 2-1 in win their first W-League Title.  In 2014 a new Australian Card company, Tap’n Play entered the card market and to their credit gave equal weighting to Socceroos and Matildas.  The collection includes the first Tap’n Play Steph Catley card.

In 2015 Steph appeared in her 1st World Cup in Canada where she played in all five Matilda matches.  The collection includes the offical tournament programme and poster, a downloadable retro designed card from the Guardian newspaper, Panini sticker and a Tap’n Play Making “History” card recognising the 2015 Matildas as being the first Australian team to make the quarter finals of a Football World Cup.  The collection also includes  a Portland Thorns “Welcome Back World Cup Stars” mini-poster (featured right) where Steph is draped in an Australian Flag alongside seven of her international Thorn teammates. 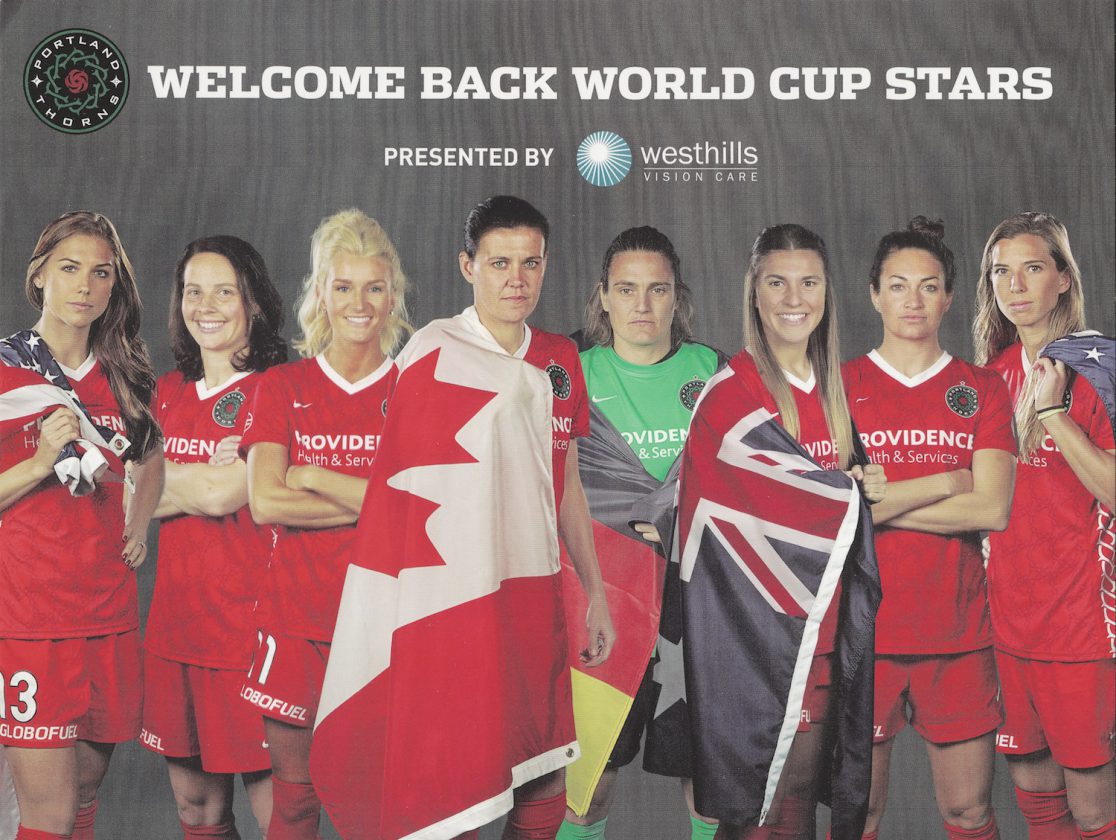 In 2015 Tap’n Play increased the quality and quantity of their cards. In addition to the Matildas Team card, there are three Base, Silver and Gold Catley cards and a limited edition (200) matching redemption and signature cards (featured left).  To my knowledge the signature card is the first ever official Matilda autographed card as opposed to 1st official manufactured autographed card by a Matilda which is an 2010 Upper Deck Washington Freedom card in the De Vanna Collection.  At the end of 2015 Steph switched A-League clubs to cross-town rivals Melbourne City.

At the other extreme in early 2016 Steph changed NWSL clubs from Portland Thorns, in the far North West to Orlando Pride in the far South East State of Florida.  Orlando Pride produce their own cards with funds raised going to the Orlando City Foundation. The collection contains three Steph Catley cards from her two years at the club.  Two cards feature studio based portraits and the other an action shot (Index card above left).  There is also Red Bubble produced iphone cover that has illustrated images of her in Orlando Pride, Matildas, Melbourne Victory and City kits.  In 2016 Tap’n Play again produced well designed Base, Silver and Gold cards and a limited edition foil “Last Line of Defence” card.  The back of this card makes reference to another first, when Steph became the first female Australian footballer to be on the cover,  alongside Tim Cahill and Lionel Messi of the Xbox FIFA 16 game.  This item is also in the collection. 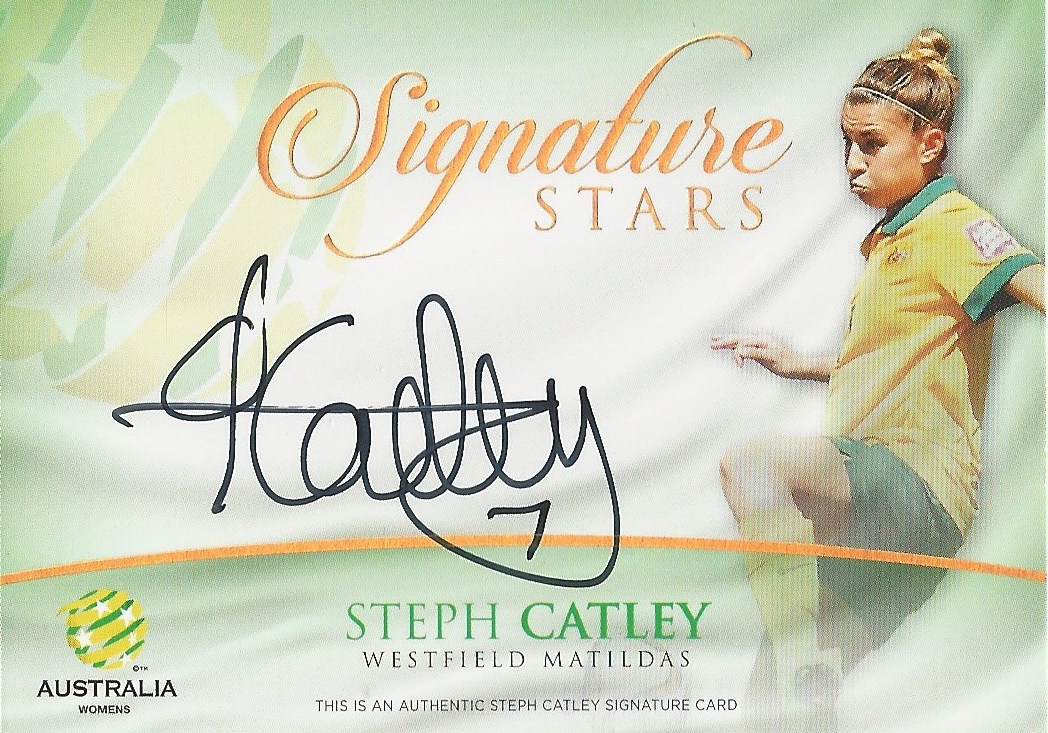 For 2017/18 Melbourne City issued a Membership brochure that features Steph, Tim Cahill and Bruno Fornaroli.  In 2017 Steph is also featured on the promotional flyer and ticket for her 63rd full international against China. In June 2018 the Matildas played in AFC Finals Tournament in Jordan.  The collection includes the Tournament Programme.  Steph played in four out of the five matches including the final, that despite the Matildas dominance they lost 1-0 to Japan.  In club terms, in the NWSL Steph was traded to OLC Reign and joined fellow Matildas Elise Kellond-Knight and Lydia Williams.  In the W-League, the 2108/19 W-League Melbourne City Membership Card featuring Steph in action.

Towards the end 2018 and early 2019 the Matildas played a number of friendlies in preparation for the 2019 World Cup in France.  From a collection viewpoint the highlight is a 24 page Lionesses Programme from the international friendly between England and Australia played at Craven Cottage in October 2018.  By way of contrast Australia arranged two home friendlies against Chile and in early 2019 hosted a four nations tournament.  The collection includes only promotional banners (both featuring Steph Catley) and tickets.

Prior to the 2019 World Cup, Panini again issued squad stickers including a Catley sticker.  There are also two downloadable Catley cards one from FFA and the other from Beyond 90 as well as a downloadable football render.  From the World Cup, the collection includes the Official Programme, four unofficial matchday programmes and three tickets. Later in 2019 Catley also featured on a promotional flyer for the Matildas matches against Chile in Sydney and Adelaide.

From 2020 there is a Melbourne City Programme (Pictured Right) from a double header against the Newcastle Jets.  Captains Catley and Jamieson are on the cover plus an image honouring the work of the firefighters who were dealing with the devastating bushfires across Australia.  The final City item is a promo for the 2020 Grand Final with Catley and four other Matildas. During Catley’s five years at City she played in five Grand Finals and won four!

In 2020 Steph Catley made the switch to playing in England for Arsenal in the English FA Womens Super League.  There is a Red Bubble sticker of her Jersey in the collection.  From international friendly Matildas matches in 2021 the collection include Danish, Swedish promotional banners, an iphone wallpaper from the Japanese match and a ticket and promotional banner from the Irish match.  There are also 2021 Tokyo Olympic official programmes, a postcard and unofficial programmes all her six Matilda matches. 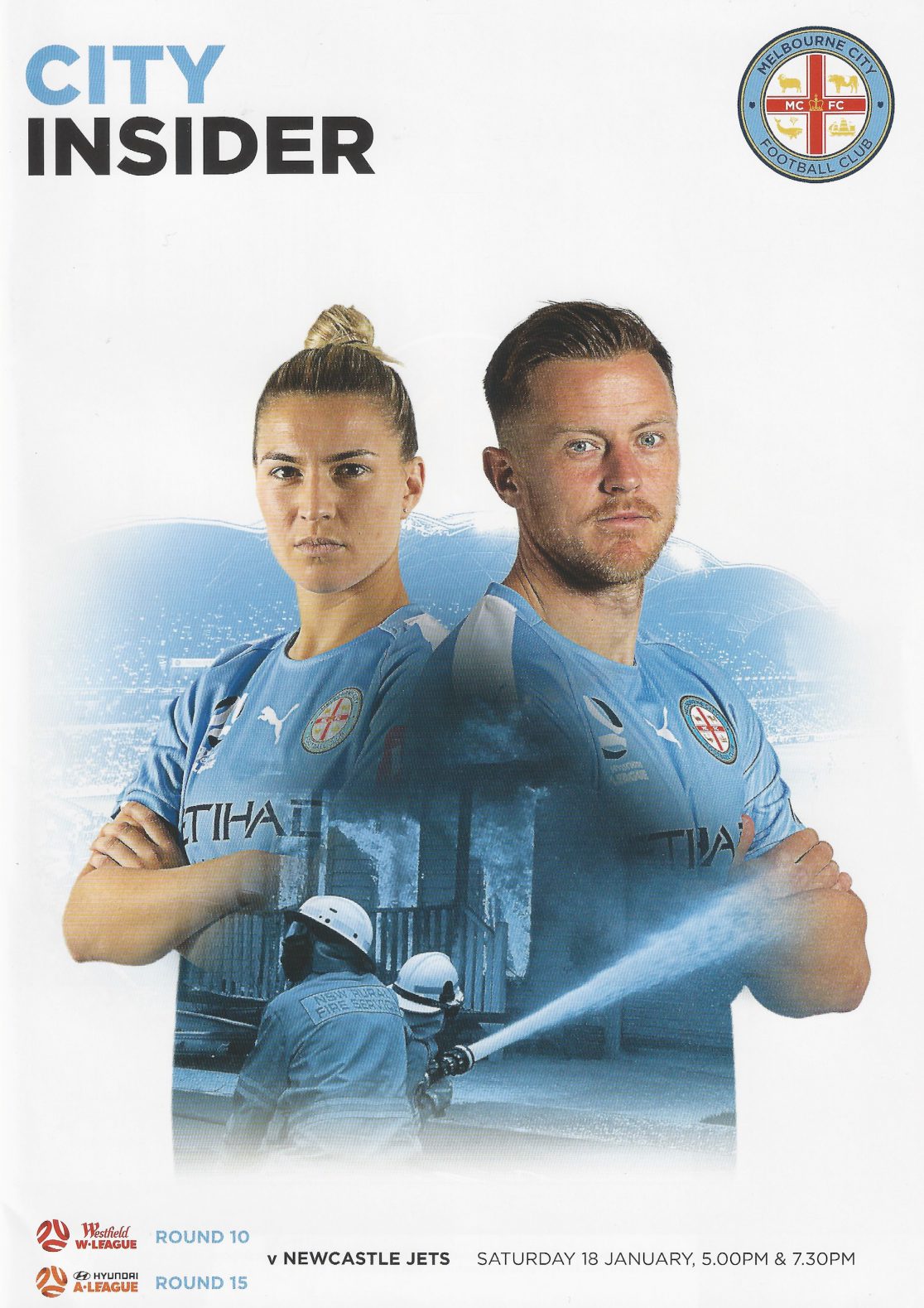 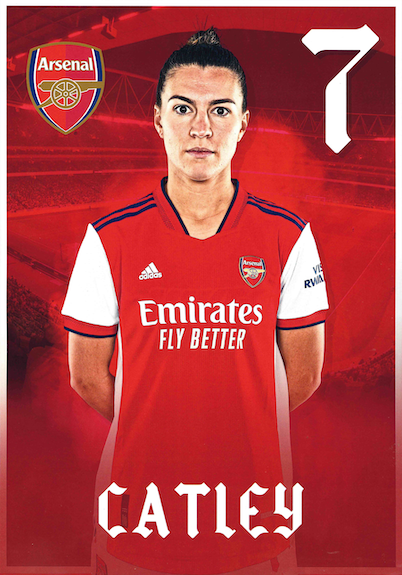