Lisa De Vanna is one of the few “Golden Generation” of Matildas that has seen the team go from having a few die hard football fans to becoming one of Australia’s most respected sporting teams.  She would also be on most people’s very short list for the greatest ever Matilda.

Like most elite Australian women footballers of the “Golden Generation” their club league careers are divided between playing in the Australian League and overseas leagues. Lisa began her career in the old Womens National Soccer League, firstly with Adelaide Sensation and then Perth’s Western Waves.   Her debut for the Matildas in 2004 was against New Zealand. The first Matildas item in the collection is a ticket from the 2004 quarter-final Olympic match against Sweden where she scored her first goal at an Olympics. In 2006-07, Lisa spent a year at Doncaster Rovers Belles in the English Women’s Premier League National Division and played in her 1st World Cup Tournament in China in 2007.  In 2008  she played for AIK in the Swedish top league Elitettan.   2008 also saw the commencement of the Australian W-League and Lisa joined her home town team Perth Glory. The collection does not any specific Lisa items from these early years,

From her two years (2009-10) at the USA Women’s professional soccer league team Washington Freedom there are three of the best items from her club career. Card company Upper Deck produced the 1st commercial Autograph and Memorabilia cards that feature a Matilda (Pictured Right) and a Matchday Programme with her on the cover. The 2011 FIFA Women’s World Cup in Germany is the first time Panini produced stickers for a Womens World cup.  The collection includes all three Panini De Vanna stickers from the 2011, 2015 and 2019 World Cups.  The most interesting is the 2011 sticker with a blonde Lisa De Vanna!

For the 2012 season Lisa returned to Sweden, this time with Linkopings and the collection includes a postcard size card of De Vanna.  Domestically she played for Newcastle Jets for the 2011/12 season and from 2012 to 2015 to Melbourne Victory in the W-League.  There are two Melbourne Victory programmes in the collection one with her on the cover and the Grand Final programme from Melbourne Victory’s first title.  Lisa continued to play in North America for different clubs including Sky Blue FC, Boston Breakers and Washington Spirit.  There are only club badge cards and stickers form those clubs.

In 2014, Tap’n Play entered the Australian card company  market, owned by the Neil Armstrong!  While he wasn’t the one that was the first person to walk on the moon but he was the first to give Matildas equal billing with the Socceroos.  The 2014 Tap’n Play card is the first De Vanna Matilda card. 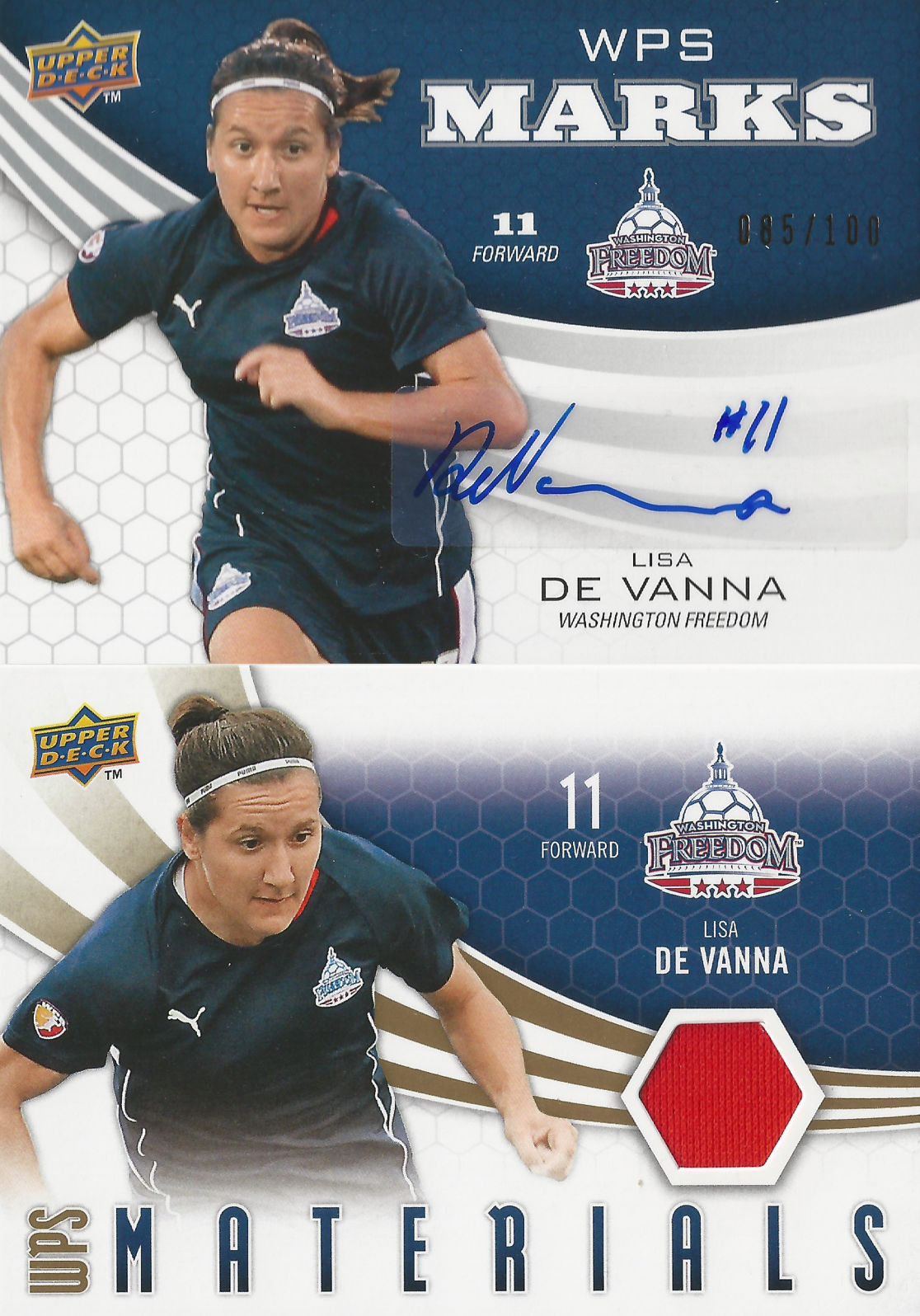 The 2015 FIFA Women’s World Cup in Canada saw Lisa play and score in her 3rd World Cup. The collection includes the offical tournament programme, poster, a downloadable retro designed card from the Guardian newspaper, Panini sticker, and a Tap’n Play Making “History” card recognising the 2015 Matildas as the first Australian team to make the quarter finals of a Football World Cup. The 2015-16 W-League season saw Lisa move to Melbourne Victory’s cross town rivals Melbourne City.  The 2015 Tap’n’Play set was probably their best. There is a three card De Vanna Base, Silver & Gold set and a Matildas Sharp Shooter card (featured index card). In 2016 Lisa briefly played with NSW Premier League Club North Shore Mariners before joining Orlando Pride in the National Womens Soccer League but was there long enough to appear in their card set. For the 2016-17 W-League season she joined Canberra United being the only W-League club that does not also have an A-League team.

The 2016 Tap’n’Play cards again included three De Vanna cards – Base, Silver & Gold.  At the end of the W-League season Lisa joined Victorian Premier Club South Melbourne where they won the Premiership. In 2019 as part of the 60th Anniversary celebrations South Melbourne produced a set of six postcards (one for each decade).  Lisa appeared, or half of her, is on the card as the team celebrate their 2017 Grand Final win. The final series of  Tap’n’Play cards include a base and foil parallel card of Lisa.  From 2017 to 2019 Lisa played with Sydney FC and during the 2017-18 Sydney FC season they conducted Junior Football clinics where players handed out thiecards.  In my view this set including the Lisa De Vanna,  is one the best official club cards produced (Pictured Left).

The collection also includes Australian and U.S.A. flyers where Lisa is used to promote international friendlies played in preparation for the 2019 World Cup.  By way of  contrast, the collection includes an English FA 24 page Lionesses Programme, where Lisa played in this October 2018 international friendly. To the FFA’s credit for the 2019 World Cup they produced an outstanding series of downloadable cards, posters, party invitations and decorations.  Lisa is pictured on a number of these items.  In addition to the FFA cards and Panini sticker, Beyond 90  produced a set of downloadable cards that included Lisa. The collection also includes the official poster and tournament programme as well as unofficial match day programmes from the two games she played. Unfortunately Lisa was unable to add to her World Cup goal tally but nevertheless together with Tim Cahill they are still the only Australians to score in three World cups.

In a surprise move after the 2019 World Cup Lisa stayed in Europe and joined Fiorentina FC in the Italian Serie A Feminine.  The collection includes a matchday programme from her Fiorentina and Champions League debut and even better an Official Arsenal programme from the return leg where  that cover has a picture from the 1st leg that includes Lisa.  After her season in Italy. Lisa returned to Australia and joined Melbourne Victory for a second time and won another championship.  She announced her retirement from the game in September 2021 and will also be one of truely greats of Australian football.