Jackson Irvine began his career with Victorian Premier League Club Frankston Pines.  The collection does not include any items from his time in the Victorian State/Premier League. In 2012 he moved to Scotland and joined the Celtic Academy. He spent most of his time at Celtic being loaned out to other clubs or playing for the Academy team. The collection does not contain any Celtic items featuring Jackson. For the 2013-14 season he was loaned out to fellow Scottish Professional Football League Club Kilmarnock.  The collection contains a Topps Match Attax trading card and a Killie programme.  The card is only item in the collection that features a clean cut Jackson Irvine. By the time he appeared on the cover of the Kilmarnock v Partick Thistle Match Day Programme in April 2014 he already has his trademark long hair. It was also during his loan period at Kilmarnock that he made his full international debut in a friendly against Canada played Craven Cottage, Fulham.  There is both a match day ticket and teamsheet from his debut.

The following season saw Jackson loaned to Ross County which was later converted into a full transfer from Celtic.  The collection comprises a Staggies programme where he appears with other players on the cover, a Topps Match Attax trading card (pictured right) and the programme and team sheet from Ross County’s historical 2016 League Cup Final win over Hibernian.  This was Ross County’s first major trophy with Jackson receiving the Man of the Match award.  The Staggies programmes for the 2015-16 season featured portrait pictures of players on the front however despite him being one of their better players he never made the cover in his last season.  Perhaps they didn’t like he chose be a Socceroo, and follow in his uncle’s footsteps rather than play for Scotland where Jackson had played in the Under 19’s.

At the end of the season, in his 3rd full international, Jackson came on as a substitute in the against Australia’s historical sporting rivals England.  It was the first international friendly match against England since the Socceroos historic 3-1 victory in 2003 at West Ham’s old Upton Park ground.  This friendly was played at the Sunderland’s Stadium of Light Ground.  The collection includes the match day programme, ticket, team sheet and even an English FA pass.  Unfortunately there was no fairy tale ending this time with England winning 2-1.

For the 2106-17 seasons Jackson Irvine transferred to newly promoted English Championship Club Burton Albion.  In complete contrast to Ross County, Jackson appeared on the cover of three “Brewer” programmes that season.  The final programme was in recognition of him receiving the player of the year and players player of the year awards. All three programmes and a Nikolai – Squad Card are in the collection. 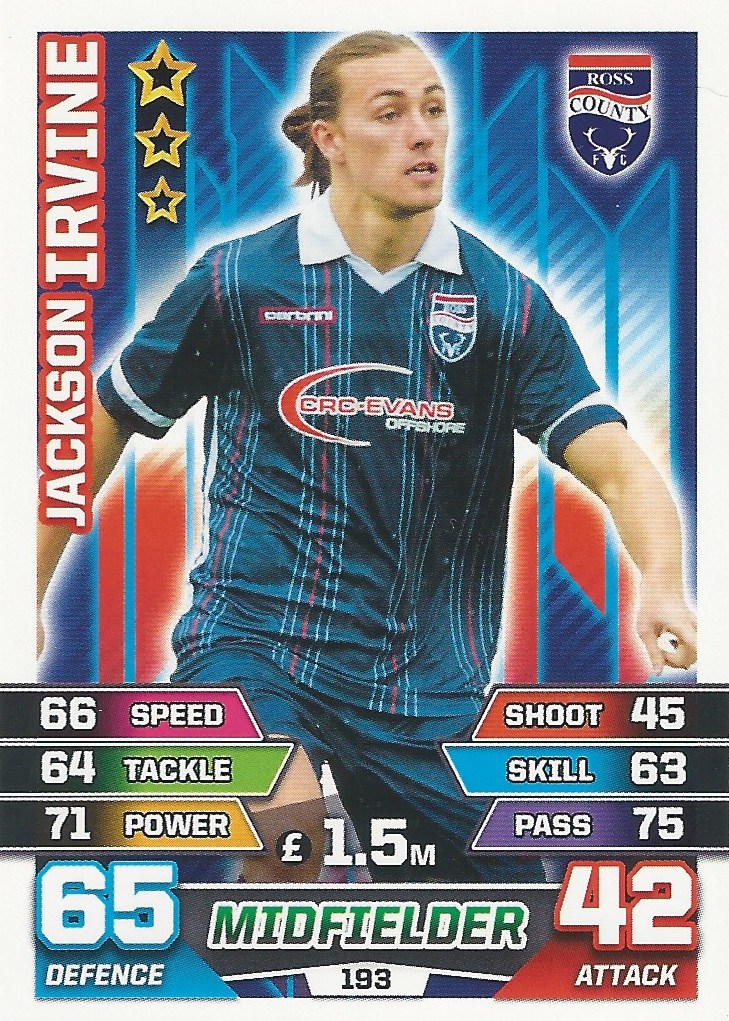 At the end of the 2017 season Jackson played in 2018 World Cup Qualifiers and at Melbourne’s MCG in another international friendly against Brazil.  This was the warm up match before Australia, as Asian Cup Champions competed in the last ever Confederations cup.  The collection includes both the entry ticket and a special seating ticket in the members stand, programme and promotional flyers including one handed out the week before at a Melbourne Victory A-League match. At the Confederations Cup Jackson played in two of the three Australian games.  The collection from the Confederations Cup comprises a Russia Post Postcard, Tournament Programme, Panini Confederations Cup sticker, two Media tickets from his matches against Cameroon and Chile as well as a AMPIR (Russian Issue) Card set issued after the tournament and featuring images of every Socceroo that played in the tournament.

After one season at the Brewers, he transferred to fellow English Championship Club Hull City  Included in the collection are two Hull Nikolai Squad series cards and Anon UK  Issue and four match day programmes. One of the match day programmes where he appears on the cover is a Millwall home programme and a FA Cup match against Premier League Club Chelsea.

In 2018 Jackson played in a number of international friendly warm up matches in preparation for the 2018 FIFA World Cup Tournament in Russia.  The collection has three away programmes against Norway, Colombia and Hungary.  However probably the most unique item in the Socceroo part of the collection from Irvine’s 18th International, with 1st time Captain Trent Sainsbury’s giving Socceroos match day banner to Czech Republic Captain Marek Suchy and then ending up in this collection. With Jackson being a regular part of the Socceroo squad there are seven world cup stickers and five world cup cards in the collection issued prior to start of the 2018 World Cup.  This includes the card featured left which was produced by Tap’n Play part of the Caltex Socceroos set and only available at their service stations.  Jackson came on as a substitute at his first World Cup in all three of Australia’s matches. The collection also includes the Official Tournament Programme and tickets as well as fan based match day programmes from his matches.

In 2019 Jackson Irvine then played in his first Asian Cup Finals Tournament.  He played in all of the Socceroos five matches and the collection includes both the Official English and Arabic Tournament programmes as well as tickets from four of five of his matches.  Currently the last Irvine Socceroo item in the collection is a downloadable phone saver.  In 2021 after 6 months in limbo after his contract at Hull City was not renewed he returned to the Scottish Premiership with Hibernian.  The collection includes a matchday programme with Jackson looking very smug!

It was expected that Jackson would stay in Scotland either with Hibs or move to Celtic to join fellow Socceroo Tomi Juric under the former Socceroo coach Ange Postecoglou.  However Irvine signed with German Bundesliga Two cult team St. Pauli.  Included in the collection is the 2021/22 squad card, his individual squad (pictured right) and a matchday programme that has Jackson on the cover plus a two page interview (in German).  In the January transfer Jackson was joined by fellow Socceroo Connor Metcalfe so lets hope tor Socceroo fans St Pauli is promoted to the German Bundesliga next season.