In playing for Olympique Lyonnais Ellie Carpenter is in elite company at one of the best female football clubs in the world. Arguably a feat only achieved on the Socceroo side by Mark Bosnich and Harry Kewell when they played for Manchester United and Liverpool respectively.

In 2015 Ellie joined Western Sydney Wanderers at the age of 15.  In less than year she made her debut in an Olympic Qualifier against Vietnam.  She then went to the Rio Olympics and was a last minute substitute against Brazil. The first Carpenter item is a 2017 Western Sydney Wanderers Matchday Programme where for “Female Footy Week” she is on the cover (Pictured above).  2017 was the also the final year Tap’n Play produced football cards and Ellie appears on the Base, Foil and on the Matildas Young Gun  (Pictured Right) cards.

The 2017_18 season saw Ellie transfer to Canberra United and in following season she is featured on both the fixture magnet and membership card.  In 2018 Ellie played her first of three seasons at Portland Thorns in the NWSL.  The collection has one Carpenter Thorns card and two stickers, one of which includes fellow Matilda and Thorns teammate Caitlin Foord.  Internationally Ellie played in four games at her first Asian Cup in Jordan and the collection Has the official downloadable programme.   Ellie played in another eight friendlies including mini-tournaments in the U.S.A. & Europe  including against traditional sporting rivals England . The collection has the Lioness programme from this match.

Prior to the 2019 Women’s World Cup in France, Panini issued their official sticker collection including one of  Carpenter. There were also Carpenter cards by FFA and Beyond 90 available for download. From the World Cup, the collection includes the Official Programme, three tickets and all four unofficial matchday programmes that Ellie played in. Later in 2019 Carpenter featured on promotional flyers for the Matildas matches against Chile in Sydney and Adelaide. The collection includes the flyers and tickets from these matches.

The 2019-20 W-League season saw Ellie play for Melbourne City.  From that one season the collection includes six items comprising three downloadable wallpaper cards, two promotional flyers for the A-League Grand Final, which was played behind closed doors due to Covid-19 and had Melbourne City winning their fourth title in five years. There is also a downloaded card acknowledging her 3rd Young Player of the Year award. 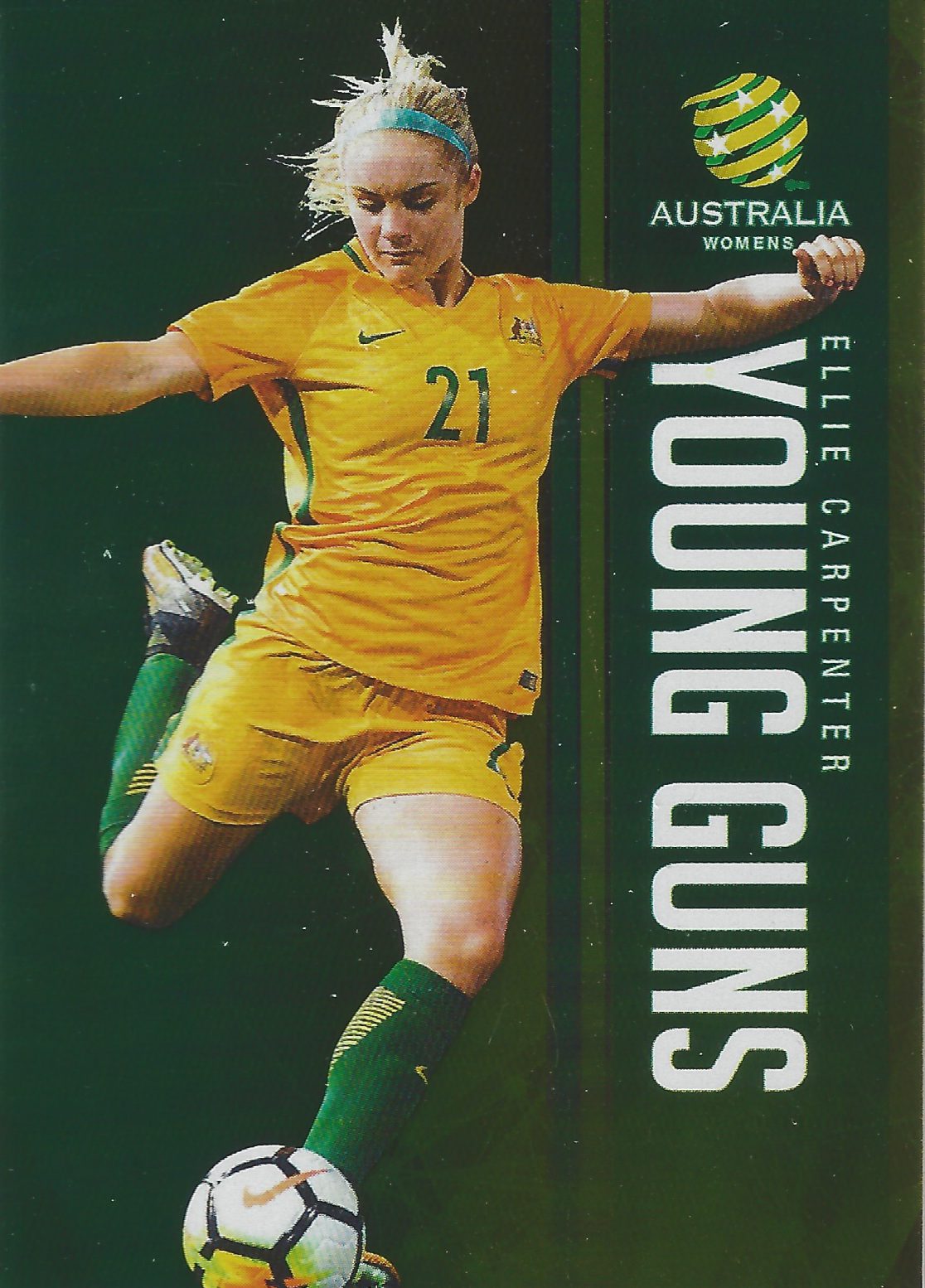 In April 2020 Ellie made her dream transfer to then four times winner of the EUFA Womens Champions League club Olympique Lyonnais.  Four months later Ellie won a champions league medal having played in qualifying matches and as part of the match day squad.  The collection includes the Champions league programme including her Pen Pic, a Panini sticker where Ellie can be seen  celebrating the in the far left corner and from the 2020-21 season a large official club card (Pictured Right).

Every Wednesday in early 2020, the FFA released a downloadable Matilda and Socceroo wallpaper card.  The Ellie Carpenter wallpaper card is included in the collection.  Similarly in 2021 the FFA produced downloadable PS4 EA Sports game covers one of which features Ellie Carpenter.  After a delay of one year due to COVIC the Tokyo Olympics were held.  The collection includes two Danish and Swedish Promotional Banners, a Japanese iphone wallpaper from warm up friendlies in preparation for the Olympics.  From the Tokyo Olympics there are two official programmes, an official postcard and five unofficial matchday programmes from all the games Ellie played.  Unfortunately in the last minute of the match against Sweden she received a red card that prevented her taking the field in the unsuccessful Bronze Medal playoff against U.S.A.  On a brighter note Ellie was picked in the French Division One Féminine Team of the Year and for the first time in the history of the PFA won both the.Women’s Footballer of the Year and Young Women’s Footballer of the Year awards.

From 2021-22 the collection includes two unusual cards Carpenter Matilda cards.  The first is one of 15 Matildas cards unofficial but high quality manufactured by Hardies and other is a Topps Match Attax Print Me card with action photo of likely Ellie taken at the Tokyo Olympics.  The collection also includes the 2021-22 Olympique Lyonnais squad card (featured right)

In late 2021 Ellie returned home with her fellow Matildas to play in international friendlies against Brazil and U.S.A. there are match day tickets and promotional flyers from these matches in the collection.  In early 2022 the Matildas went to India to play in the 2022 Womens Asian Cup.  Ellie did score a brace in the 18-0 defeat of Indonesia but disappointingly Australia was knocked out by the Korean Republic in the Quarter-Finals.  The collection includes the official squad sheet. In April 2022 the Matildas played two international friendlies against their fellow 2022 World Cup Hosts New Zealand.  The collection has a promotional flyer and match ticket from the series.