Elise made her debut at 16 along with 10 other Matildas in 2007. The match was an Olympic Games Qualifier, but as the Matildas already had failed to qualify, the next generation were given the opportunity.  Current Golden Generation Matildas that also made their debut in this match were Tameka Yallop (nee Butt), Clare Polkinghorne, Kyah Simon in addition to now the cricket superstar Ellyse Perry. The first Kellond-Knight item in the collection is a Panini sticker issued for the FIFA 2011 Women’s World Cup in Germany.  This was the first time Panini has issued Women’s World Cup Stickers and they are a similar design to the men’s version with portrait pictures of each country’s squad.  This was also Elise’s first World Cup and she played in three of the four, Matilda’s World Cup matches.  At the end of the tournament Elise was named in the 2011 World Cup All-Star Squad.  Elise also went on to win the PFA Footballer of the Year Award in 2011.

In the inaugural W-League competition Elise started her club career with her local state team the Queensland Roar that two years later changed its name to Brisbane Roar.  Kellond-Knight spent seven years in her first stint at the club. In 2102-13 Brisbane Roar released a W-League set of player cards including a Kellond-Knight card (pictured right).  This is the only W-League card of Elise in the collection.  During her time at Brisbane Roar she won two championships in 2008-09 and 2012-13 and was loaned out to Hammarby IF in the Danish Elitedivisionen and to Iga FC Kunoichi Mie in the Japan’s Nadeshiko First Division. There are not any Kellond-Knight items from her time at these clubs in the collection.

In 2014 a new Australian Card company, Tap’n Play entered the card market and to their credit gave equal weighting to Socceroos and Matildas with 20 cards each. However it was probably a step to far to also produce both A-League and W-League cards.  The 2014 Tap’n Play Elise Kellond-Knight issue is her first Matilda card in the collection.

In 2015 Elise appeared in her 2nd FIFA Women’s World Cup hosted by Canada.  She played in all five Matilda matches.  The collection includes the offical tournament programme and poster, a downloadable retro designed card from the Guardian newspaper, her 2nd Panini individual sticker and Starting Line-Up sticker and a Tap’n Play Making “History” card recognising the 2015 Matildas as being the first Australian team to make the quarter finals of a Football World Cup.  On a personal level she again was selected in the World Cup All-Star Squad.

At the club level, success at the World Cup saw Elise secure a three contract with German Fraun Bundesliga club 1. FFC Potsdam Turbine.  One of the benefits for the collection of Australians playing in Germany is that most clubs produce postcard size cards of all players in their squad.  Potsdam Turbine is also one of the clubs that also make the effort to have well designed cards rather than a standard portrait picture.  In addition they also produce a substantial matchday magazine. For the 2015-16 season there is the official club card that on the back has a summary of her career history including a list of achievements.  There is also a “Die Turbine” Matchday Magazine from the September game against vFL Wolfsburg.  Elise is on the cover in a goal celebration and on the squad page.

In 2015 Tap’n’Play increased the quality and quantity of their cards. In addition to the Matildas Team card, there are three Base, Silver and Gold Kellond-Knight cards and a Midfield Generals card that acknowledges her as “A shining star of the Matildas in 2015, Elsie is a powerful force in the Matildas team”.  For the 2016 Tap’n’Play issue they increased the quality of the cards and employed an American card designer.  All standard club and player cards feature a stadium and storm clouds in the background.  There are base, silver and gold editions of these cards

From Potsdam Turbine in 2016-17 there is the official club card and teamsheets and programmes, with Elise is on the cover from two games.  There is also a poster and an advertisement for the Potsdam community Ap that features Elise celebrating with teammates.  In 2017-18, her final year at Potsdam, there is another official club card which is the featured index card above left. It was also the final year that Tap’n’Play produced football cards and the collection has the Kellond-Knight base and foil parallel cards.

In October 2018 in an international friendly against England at Craven Cottage Elise became only the 5th player to represent the Matildas in 100 matches.  Then in November in an international friendly against Chile in Penrith she played her 101st match and 100th full international.  The collection includes both the English Programme and a ticket from the Chile match. At club level in 2018 Elise returned to Hammarby IF and then for the 2018-19 W-League season played at Melbourne City.  In 2019 she signed her first U.S. National Womens Soccer League contract to play for Seattle Reign however under some bizarre rules was traded to Washington Spirit. The collection does not include any Kellond-Knight items from these clubs.

In June 2019 Elise played in her 3rd World Cup this time hosted by France.  The collection includes her 3rd Panini Sticker, downloadable cards from Beyond 90 & the FFA,  official programme, unofficial programmes from all four matches as well as three tickets from the group matches against Italy, Brazil and Jamaica.  In the round of 16 knockout match against Norway, Elise scored her 1st world cup goal from a corner kick and only her second international goal of her career.  At this stage the last Kellond-Knight  Matilda item in the collection is a downloadable wallpaper from the Matildas website (Pictured left).

At club level Elise returned to Brisbane Roar for 2019-20 season.  Then in 2020 returned to Europe to first play with Swedish club Kristianstads DFF in the Damallsvenskan where she suffered an ACL injury.  This was her second ACL after suffering one playing for fellow Swedish club Hammarby in 2011.  In another irony after over 9 months rehabilitation she then played for Hammarby again.  From the Swedish clubs the collection includes a Christmas Greeting posting from Kristianstads and welcome back posting from Hammarby.

Elise is a key member of the Golden Generation of Matildas.  With well over 100 games for the Matildas, successful World Cup campaigns, a playing career across Europe, USA and Australia as well as a number of individual awards she is an outstanding role model.  A quiet achiever respected and admired by teammates, opponents and fans. 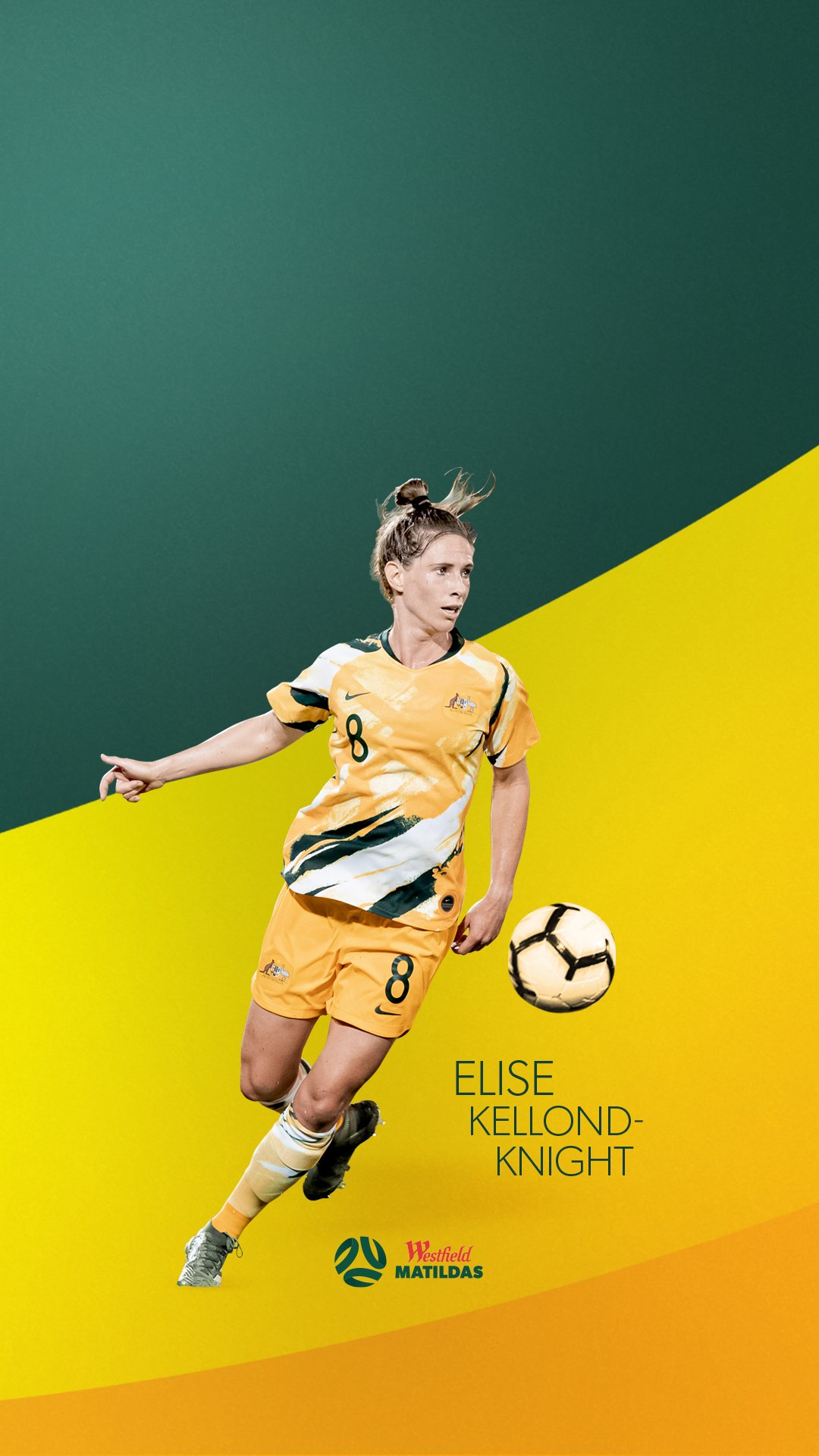