At the end of that season he signed a contract with Eredivisie powerhouse club Feyenoord but never played a game for them as he was loaned out to their feeder club Excelsior for four years. He played more games for Excelsior than any other club but the collection has only one Brett Holman item, an Official Club Card from the 2002-03 season when they played in the Eredvisie.  For the next three seasons Excelsior and Brett played in Eerste Divisie (Dutch second division).

At the end of the 2005-06 season Brett Holman transferred to Eredvisie club N.E.C.  He played two seasons for the club and the collection includes Magic Box Int, Plus (A Dutch Supermarket Chain) and official club cards from his two seasons playing for N.E.C.  During his time at the club he made his debut for Australia against Bahrain in the Socceroos first Asian Cup qualifying match.  The collection does not include any item from this match and while he did not make the 2006 World Cup squad there are programmes from his next two Asian Cup qualifying matches as well as three international friendlies.  He was in the 2007 Asian Cup squad and the collection includes a programme and two of three match day tickets from his appearances at the Cup. He also appeared for the first time in the Select’s 20 man Socceroo squad set where the back of card correctly predicts his contribution to the 2010 World Cup qualification campaign.

At the end of his 2007 -08 season with N.E.C.  he transferred to fellow Eredivisie club AZ Alkmaar.  There are three Brett Holman cards, a match day programme plus an AZ squad card and sticker from his first season.  One of these cards is a well designed Magic Box International Card with career details on the back and is the index card shown above .  The 2007-08 season was probably Brett’s most successful regularly playing for AZ and winning the Dutch Eredivisie title for only the second time in the clubs history.

In 2008-09 Brett Holman competed for the first and only time in the EUFA Champions League.  The collection includes a Panini Champions League Card  and a Japanese WCCF European Club Card (pictured right).  Of the five stickers from 2008-09 four are produced by the AH and include a shiny Dutch Eredivisie Championship Plate, two squad stickers, and a printed gold autographed portrait Holman portrait sticker.  The other sticker is from Panini’s European Champions League Official Sticker collection which has the same image as the AH autographed Holman sticker. There is one Eredivisie Match Day programme where he appears on the cover.

For the first time the Socceroos qualification route for the World Cup was through the Asian Confederation.  The Socceroos were one of the first teams to book their ticket to South Africa. Brett played in seven World Cup qualification matches, of which there are  four “The Socceroo” programmes. The number of manufacturers of cards and particularly stickers started to increase for the 2010 World Cup and has continued at an almost exponential rate every four years. There are five Brett Holman 2010 World cup stickers and three cards including a very nicely designed Argentinian Card.  The other notable item, is a Unleash 2010 postcard sized Brett Holman card (featured left). At the 2010 South Africa FIFA World Cup, Brett played in all three matches and scored a goal against Ghana and a  spectacular one in the final group match against Serbia. There are match day tickets from his three matches as well as Official World Cup programme.

Brett continued to play at AZ for another two seasons and the collection comprises a further three match day programmes, including an August 2010 UEFA Europa League Matchday programme against FK Atobe from Khazakhstan.  There is also a Plus Pop-Up Card and Official Club card from the 2011-12 Season.  The most unusual item in the whole collection is a hand clapper from a 2012 Eredivisie match against PSV with Brett celebrating a goal.

In 2012-13 he transferred to English Premier League club Aston Villa,  There are three Holman cards, two of them by illustrator Robert Hood and a Match Day Programme.  At the end of that season the transferred to Al Nasr in the UAE Pro League and then after two seasons played at the Emirates Club in the same league.

Brett played in eleven World Cup Qualifying matches for Brazil 2014 with only three World Cup Qualifier programmes in the collection.  There are also three international friendly programmes.  Nevertheless with the Socceroos qualifying for their 3rd World Cup in a row, Brett Holman appears on seven stickers and five cards.  The most interesting card is produced by SE Products, who only produced the one A-League & Socceroo set but this set widely regarded by collectors as their favourite.  From SE Products Road to Rio sub-set, honouring every Socceroo that played in World Cup qualifiers, the back of his card states “…the quiet achiever… a key factor in a number of roles. Proved in South Africa he has the ability to score key goals at the big moments”.  However prior to new Socceroo Coach Ange Postecoglou picking his 2104 World Cup squad for Brazil, Brett announced his retirement from international football.

In 2016 he returned to Australia and played his three seasons with Brisbane Roar.  The collection finishes with a Perth Glory Match Day programme where he appears on the cover and two Tap’n Play cards. 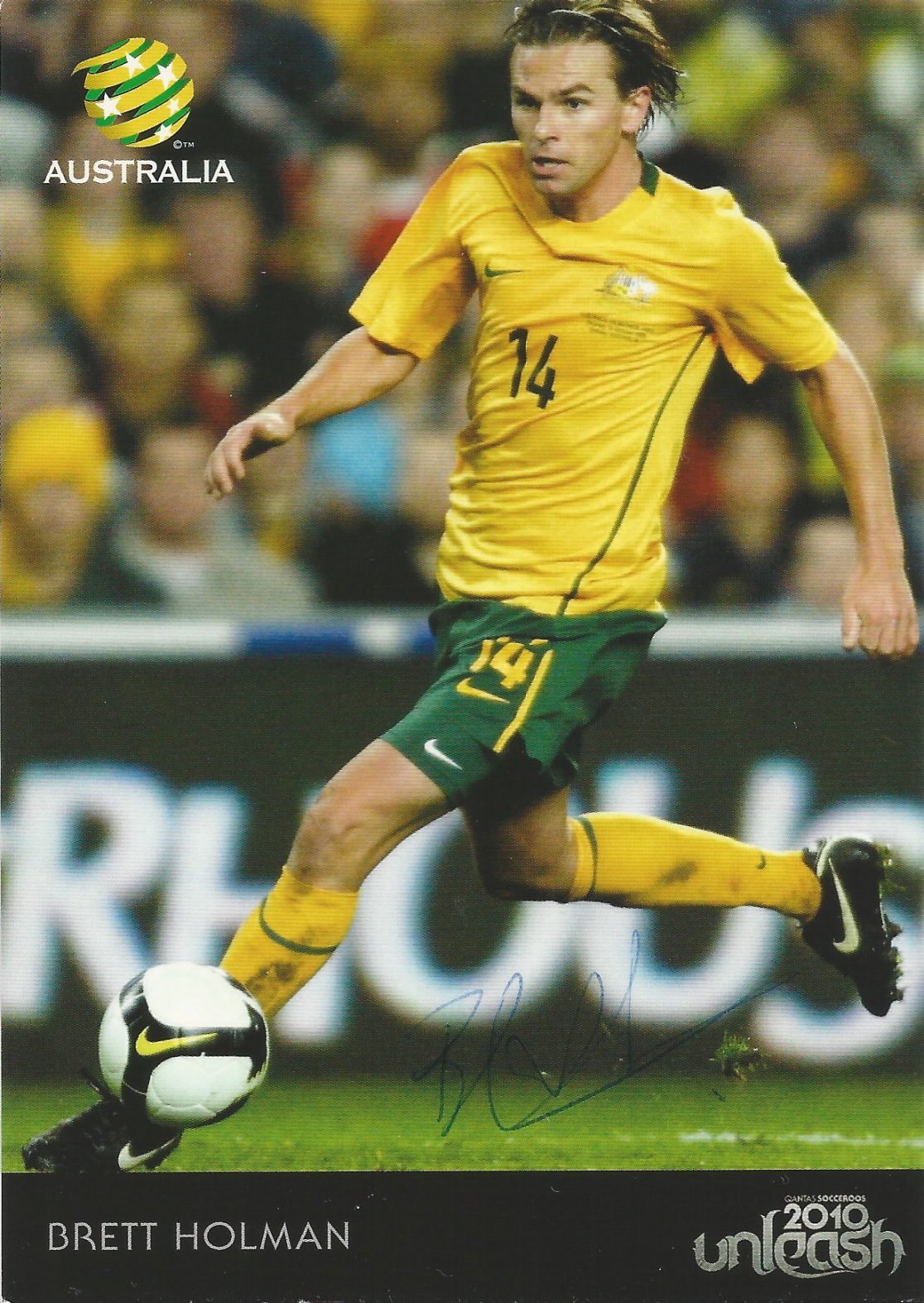