His professional career began at Sydney Olympic where played for four years and the collection commences with a Sydney Olympic squad centre-fold poster from a National Soccer League match against Marconi Stallions in 1999.  He made his Socceroo debut against Chile in February 1998 and the collection includes the Optus World Series Tournament Programme from his debut, 2nd and 3rd full internationals.  There are also two Olyroo Programmes where appears on the cover, the 2000 Sydney Olympics Football Programme and most unusually, but not rare, a Melbourne Met rail ticket in the collection.

In 2000 Brett Emerton transferred to the Dutch Eredivisie club Feyenoord where like many Continental European clubs they produce postcard size cards of all their squad.  The collection includes all three of his Feyenoord squad cards. 2001 saw him feature for the 1st time on the cover on a Socceroo Programme for the WCQ against New Zealand and shortly thereafter on the one against Uruguay.

In 2002 Panini produced an official sticker collection for Feyenoord with five Emerton stickers.  The collection also has to my knowledge. the only, Champions League Programme that has Brett on the cover from a group match against Dynamo Kiev. There is a Matchday programme from the famous international friendly win over Australia’s traditional sporting rivals, England.  This was the last international for Brett while playing at Feyenoord and he also scored his 5th international goal.  Probably the rarest and last Feyenoord card is from a 2003 Japanese set that featured players in a friendly match against Urawa Red Diamonds. The image of Brett is the same as the one used on his last official Feyenoord club card (shown left).

In the Summer of 2003 Brett Emerton transferred to English Premier League club Blackburn Rovers where he joined fellow Socceroo Lucas Neill. From his first season at Blackburn Rovers the collection comprises three cards, including a Robert Hood illustrated cartoon of Brett, two stickers and two Rovertime match day programmes where he is featured on the cover.  The November Rovertime programme has the caption “Finding Emo” no doubt a reference to the popular Pixar film “Finding Nemo”.

2004 saw the start the qualification process for the 2006 World Cup.  The collection has three programmes from the Oceania Nations Cup part of the World Cup qualification where in six games he scored four goals.  Due to most of the Socceroo squad plying their trade in Europe, as preparation for the Word Cup Qualification games Australia started to play many international friendlies in England where Fulham’s Craven Cottage became the home ground.  The collection includes Match Day programmes from matches against South Africa, Norway, New Zealand and Jamaica. Brett is one of the players on the cover Match Day programme against New Zealand.

In terms of Blackburn Rovers, in 2004-05 Brett and fellow Socceroo Lucas Neill appeared together on the cover of two programmes the Christmas/Boxing Day Match Edition and the October Aston Villa match edition where they were looking forward to a successful Premier League season as well as World Cup qualification (Pictured Left). For a brief number of years phonecards became a popular collectable and in 2004 China Telecom issued a Blackburn set including Brett Emerton. The collection also includes both the English and Japanese 2005 Topps Premier Gold Brett Emerton card.

For the 2005-06 season, Blackburn Rovers produced an official squad cards the portrait image used Brett is the same as the one used for the  Merlin’s 06 Sticker collection. There are also programmes from both the Uruguayan and Australian legs of the successful final world cup qualification matches.  For the Uruguayan leg there is an Uruguayan Promotional Flyer and a Sydney FC breakfast programme with the Match Day Programme from the return in leg in Sydney.  Qualification for the 2006 World Cup produced six stickers with images of Emerton.  There were also two sets of playing cards a portrait and action series released with Emerton featuring on many cards. Brett played in all three group matches at the World Cup and the collection includes both German Programmes and tickets from these matches. He did not play in the knockout match against Italy due to suspension.

Post the World Cup Fairfax Newspapers issued tribute cards with medals and depending on the newspaper 15 or 20 cards were produced. Select the premier card company for Australian Rules and Rugby League started production of Soccer Cards in 2006.  For three years they produced both Socceroo and A-League sets. All three Emerton Socceroo cards produced by Select are in the collection.  Similarly, Futera started to increase the numbers of Australian players included in their releases and the 2007 World Football edition is the first Brett Emerton Futera card in the collection. In June 2007 the Socceroos played an international friendly against Singapore at their National Stadium just before the start of the 2007 Asian Cup.  The programme has Brett Emerton on the cover. The collection also has the 2007 Asian Cup Official Magazine and two tickets from the matches he Brett played. 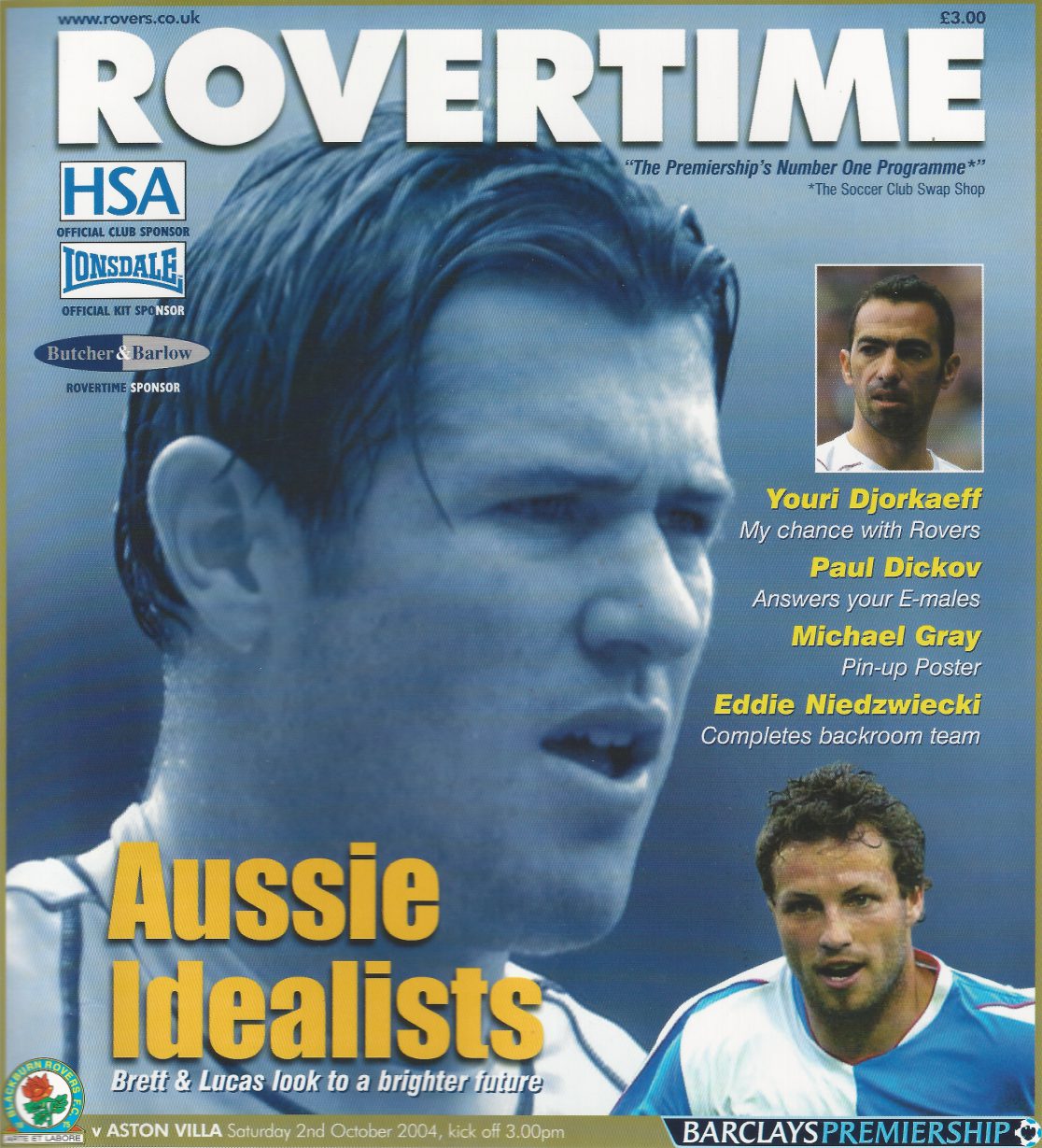 From 2007-09 an unusual item is a Brett Emerton Socceroo card from the South Australian Mighty Soft Bakery where they inserted into their bread packets Adelaide United and Socceroo Cards.  Brett also continued to play regularly for the Socceroos and appeared on the cover of the international friendly programme against South Africa however he did not play in this match,  The same image of Brett Emerton on that programme also appears on the 2009 and last Select Socceroos and A-League card issue and the 2009 Futera World Football World Online Game Card Collection. In the 2009-10, for the first time Topps Match Attax did not issue a Blackburn Rovers card of Brett Emerton. However Brett did appear on a Blackburn Rovers School Fantasy League card and in the Topps 2010 Official Sticker Collection.

From the 2010 FIFA World Cup in South Africa the collection comprises one photo, five stickers, six cards, the official tournament programme and with Brett playing in all the World Cup games there are three match day tickets.  Panini were again the Official Card Collection manufacturer for the World Cup and that collection of 198 cards had only three Australian cards one of which was Brett. The card is shown left and is a clear plastic card.In my view this collection is one of better World Cup issues and last one before “Rainbows” appeared. It appears this type of card was only manufactured from 2009 to 2011. Cards in the collection from the 2010 World Cup also include the English and French versions of the Match Attax cards and an Argentinian card.

2010-11 was Brett’s final season at Blackburn Rovers.  After an absence of two years Match Attax again produced an Emerton card and the collection also includes a Russian version of that card.  The last Blackburn Rovers match day programme to feature him on the cover used the same image as the card.  In 2011 Brett again represented Australia at the Asian Cup and the collection includes the tournament programme and five tickets from the from games he played.

For the 2010-11 season Brett moved back to his home town of Sydney for the final three years of his professional career.  In 2012 the Socceroos were invited to qualify for the East Football Federation Tournament and the squad comprised primarily of A-League players including Brett.  The collection includes the Tournament programme where he played his last three matches for the Socceroos.  In 2013-14 SE Products produced a Socceroo and A-League collection, regarded by many collectors as the best Australian series produced.  The Emerton collection comprises a base card, autographed card of 500 and a rarer unsigned version of the same card. Due to ongoing injuries in 2014 he retired after a 14 year professional career most of which was played in the top leagues in Europe. With 95 full international caps he is the 5th highest capped player of all time.